Today we’re delighted to share this special flash by Anne Riesenberg, which we nominated for a Pushcart Prize in 2018, “Sky Full of Birds“: 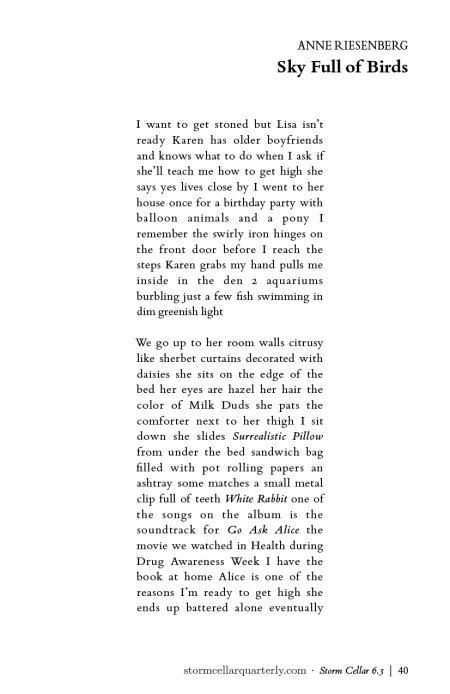 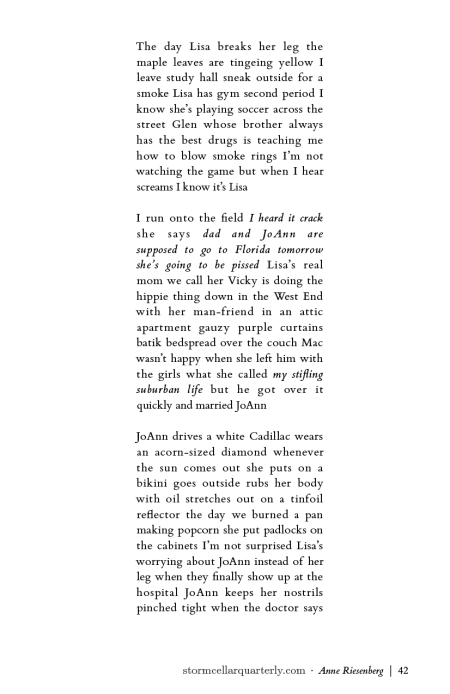 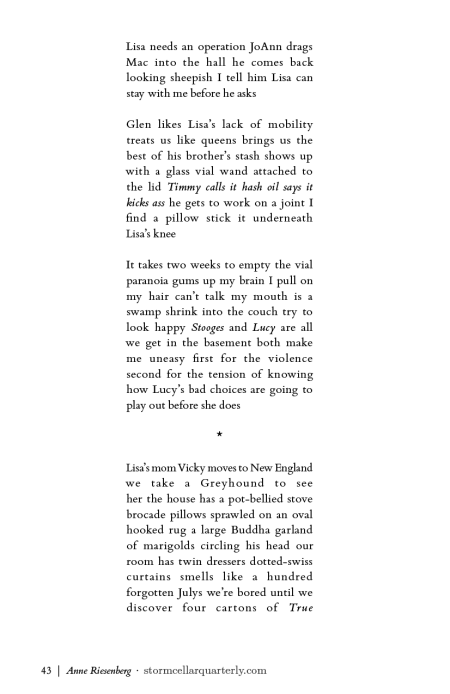 This flash originally appeared in SC 6.3, available in print and download formats at our store; to receive more like this via handy (e)mail, subscribe! And read on.

The winner of the 2017 Force Majeure Flash Contest: 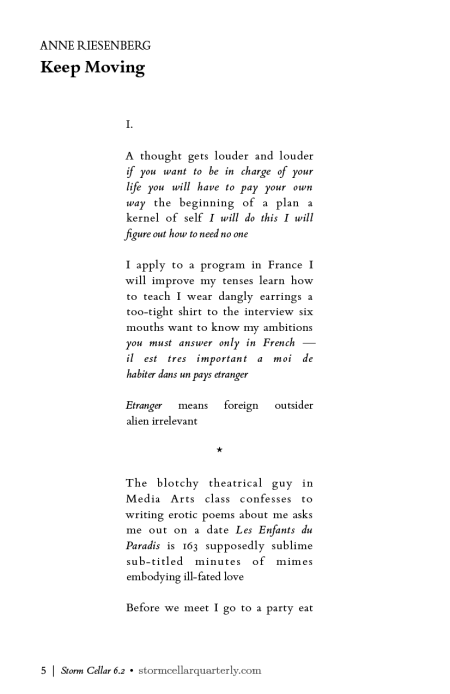 Get Storm Cellar here (print) and here (ebook), and subscribe! Submit to SC here, and read on. 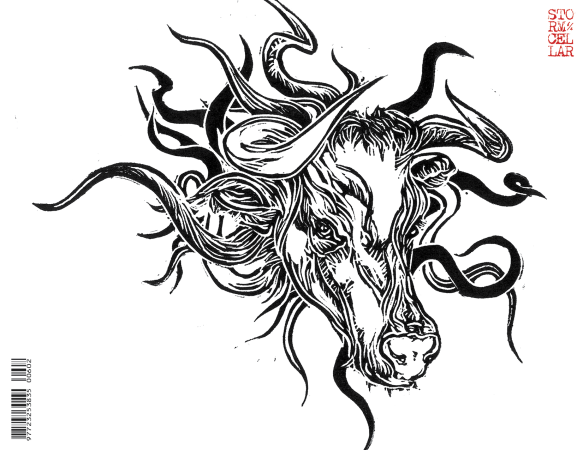 You guys. Check out the issue and get your very very own copy: PRINT! and EBOOK!!  (pdf, epub, mobi) editions. Read on.

It is our pleasure to announce the winners of the 2017 Force Majeure Flash Contest, as decided by Sidney Taiko, Editrix of Storm Cellar and the Managing Editor Benjamin Goodney:

TOP PRIZE
“Keep Moving” by Anne Riesenberg.
A perfect balance of nuance, the unexpected, and the familiar. In keeping with the title, this piece moves: staccato thoughts flowing together in a well-cinched column, in contrast to the progression of the greater narrative, resulting in a surging-forward feeling. Concrete images (pink ribbons braided into raven-black hair, for one) juxtaposed with lines like, “In my favorite my mother has two mouths one joyful the other slides off her face.” This flash taps into a deep human experience that we constantly seek when reading. This notion of “running into the arms of my life,” while shame is floating somewhere in the background. It’s unapologetic, raw, and peppered with the kind of intimate and funny details that we’re all desperate for (who doesn’t want to know about the time your friend threw up the pot brownies?).

SECOND PRIZES
“P.S. While You Were Sleeping” by Bucket Siler.
One of the most fascinating and formally daring entries. Many lines might be considered whole stories, and yet they still join together thoughtfully and playfully. Its exciting, phantastic ideas and unexpected moves a welcome surprise in an age of pyramid-diagrammed miniatures. This piece is fun, sharp, and deftly engineered. The personality of the narrator shines through… if we could befriend a piece of flash fiction, “P.S. While You Were Sleeping” would be hanging out at the corner bar with us right now.

“Hunger” by Rita Ciresi
Another narrative paying close attention to both character and situation while using the formal possibilities of limited space. One of the entries that drew us through subject matter — social relevance is significant, and yet this piece doesn’t seem to want to promote a specific agenda. The use of second person is effortless and the narration is childlike without being childish. We’re fans of code-switching and it’s employed efficiently here.  A close-cut, intimate, and memory-filling piece.  This one will stick with us.

We would also like to recognize our outstanding HONORABLE MENTIONS:
“A Not-So-Angry Inch” by Alex Clark. Thoughtful and intimate, yet raw and unfiltered, an underrepresented perspective given full form in a tiny space.
“To Live and Die in EV” by Oscar Mancinas. Bluntly delivered, a space between childhood and adulthood from which we are unsettled, gorgeous lines peppered throughout.
“In Olden Times” by Derek Updegraff. A turn from whimsical to lovelorn retrofits this piece with deeper meanings for its perfectly developed character moments.

All of the winners combined powerful language and imagery, careful attention to formal matters, unique insight, and a certain grace; congratulations are well deserved.

Thanks to all the entrants! We received nearly five hundred entries, more than we had hoped for, and with so many fine flash works we were nearly spoiled for choice. Indeed, a few more contest entries will be published in our magazine; we’d like to have taken more, but we had to draw a line somewhere. Thank you, everyone, for sharing, participating, and helping this little contest-experiment of ours come off a roaring success.

We’re really excited to bring you these flashes in the next issue of Storm Cellar, so get ready for it. And: read on!